Our country is currently facing a high incidence rate. This prevents us from holding a full-featured event on 12 September, as there will be still the risk of infection even subject to all the precaution rules and restrictions. 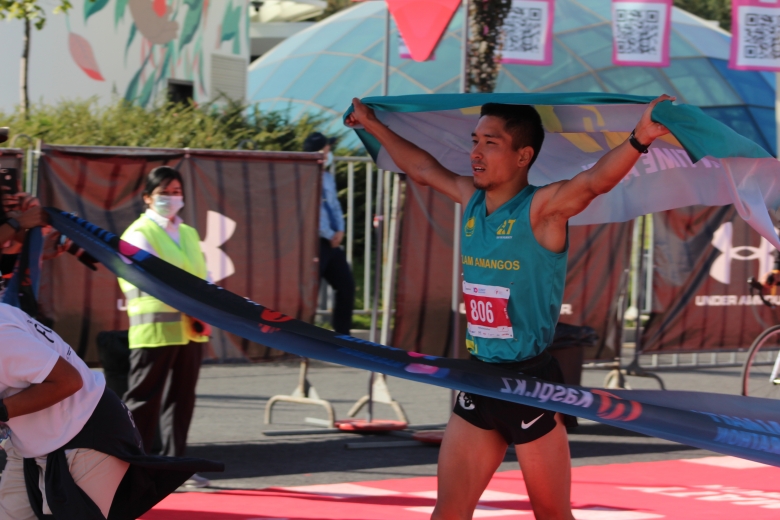 This year the Almaty Marathon was held for the tenth time. The sports event brought together residents and guests of the southern capital, fans of a healthy lifestyle. All participants checked their status via the ASHYQ app to ensure safety at the event. Wearing the face mask all the time before the start and immediately after the finish was a compulsory condition for admission to the start camp.

The Almaty Marathon took place for the first time after a long break. The previous marathon was held in April 2019. In 2020, the event was cancelled in connection with the coronavirus pandemic.

Traditionally, the following distances were available to the event participants: marathon runners (42.2 km) started running first at 7:30 a.m.; they were followed by the 21.1-km distance runners, then runners and participants of the Nordic Walking for 10 km. Residents of Almaty became the first finishing marathoners. They are Islam Amangos and Dana Gussarova (among girls).

Shokhrukh Davlatov from Tashkent took gold of the 21-km distance. Assem Kabidoldanova from Almaty won the main medal in the Half Marathon Distance among girls.

“Almaty Marathon was postponed twice this year. Despite all obstacles, we successfully organized this event and gave every runner the opportunity to express themselves and finally show results of their trainings,” comments Almaty Marathon Director Saltanat Kazybayeva. “This year, many residents of Almaty and guests from other cities of Kazakhstan took part in the competition. However, fewer foreign runners participated in the event this year due to difficulties with border crossing. Nevertheless, we managed to obtain permissions for about 60 athletes from Kyrgyzstan and Uzbekistan to enter the country.”

Registration for the Almaty Half Marathon will be available already on Monday, 27 September. The event is scheduled for 17 April 2022.

The Almaty Marathon is supported by the Almaty Akimat.

Organizers of the Almaty Half Marathon: “Courage to be the First” Corporate Fund, fitness club World Class Almaty, Sh.Yessenov Science and Education Foundation and multisports Youtube-channel #Different you.

Registration for the Almaty Half Marathon 2022 is open now