For 3 years, the largest trading company in Kazakhstan, a leader in the sales of electronics and home appliances Sulpak, has supported the ideas of the “Courage to be the first” Corporate fund. Promoting healthy lifestyle and active sports is one of the main priorities of both partners. 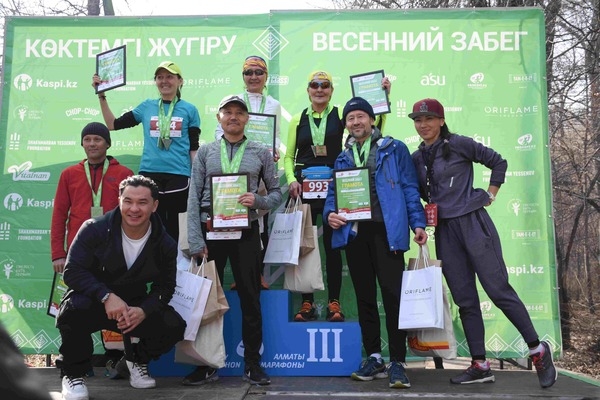 March 16, 2019, the Spring Race was held in the Baum’s grove in Almaty, 1200 amateur runners took part in the competition.

March 16, 2019, the Spring Race was held in the Baum’s grove in Almaty, 1200 amateur runners took part in the competition.

- The Spring Race proved once again that people of all ages can play sports, in particular, run. For many people running is not just a sport, but a philosophy of life. Parks of the city, such as the Baum’s grove, the Park of the First President are the best places to run and get prepared for big starts.

Runners of the children’s race for 3 km (10-14 years old) were first to start the competition. The leader among the boys was Dominik Bolovintsev, and among girls – Rima Grankina.

The fastest participants of the Spring Race - three leaders among men and women - received cash prizes in the amount of: for the 1st place - 50,000 KZT, for the 2nd place - 30,000 KZT and for the 3rd place - 20,000 KZT. The winners among the participants of the main distance of 13 km became Mikhail Krassilov, with a time of 41 minutes 6 seconds and among women – Yuliya Fernas from Bishkek, with a time of 52 minutes 1 second.

The results of the Spring Race are published on the website of the Almaty Marathon.

- Seasonal races are a great opportunity to prepare for a big start. This year I will run my third half-marathon - 21 km. When people ask me whether it is possible to become successful without sports, I ask another question. Imagine that you need as soon as possible and safer to get from point A to point B, the distance between which is more than 1000 km. Which vehicle will you choose - a compact car with unknown characteristics or a powerful and proven SUV? The most frequent answer: SUV. So it’s in life: if you don’t know the physical characteristics of your body, you don’t know what kind of “fuel” you need, you don’t experience the capabilities of your “engine”, and you won’t know how fast and how long you can move forward. Sport charges, teaches to set goals and implement them, even when it is hard. It makes us stronger”, says Almaty Marathon’s Brand Ambassador, athlete, success coach Askar Amanbayev. -

The spring Race is the final stage of preparation, a springboard for the large sports event "Almaty Marathon" 2019, which will be held on April 21. Registration for the largest sporting event in Central Asia is open until April 1 on almaty-marathon.kz.

For everyone who wants to prepare for the Almaty Marathon weekly on Saturdays at 10:00 in the Park of the First President (Almaty) open training sessions are held. Free entry!

The organizers of the competition are the Courage to be the first Corporate Fund, the World Class Almaty fitness club and the Academician Shakhmardan Yessenov Scientific and Educational Foundation, with the support of the akimat of Almaty.

The general partner of the seasonal races and the “Almaty Marathon” is Kaspi.kz.

Doctors give advice for marathon

There are only 10 days left until the Almaty Marathon. On April 21, 17 000 athletes from 53 countries of the world will line up at the start!