Qualification for the Asian triathlon Cup has started in Almaty

The ASTC Asian Cup international triathlon tournament for professionals and amateurs will take place from the 3rd - 4th August 2019 in Almaty. 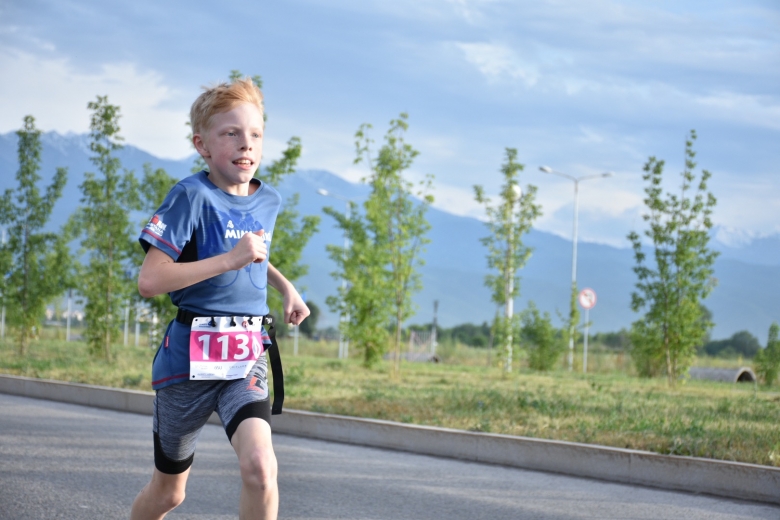 July 22nd saw the Summer Run in the Almaty Arena sports and entertainment complex. 1200 runners ran a distance of 12 km. There was also a 3km children's race and an 8km Nordic walking race.

At the children's distance (3 km), the fastest boy was Ramazan Ainegov and the fastest girl was Alina Klinyushina. The real struggle for the championship was in the main 12km distance. Mikhail Krasilov again became the men's champion, he was ahead of second-placed Yerzhan Janarstanov by only 49 seconds. Among the women, the first to the finish was Julia Furnas, who was three minutes ahead of the runner-up. Julia is an ambassador for the Almaty Marathon in Kyrgyzstan and helps people to participate in cross-country competitions, conducts training sessions and gets teams together for competitions. Those who took first place received cash prizes of 50 thousand tenge, second place - 30,000 each and the third - 20,000 tenge.

For the first time, the annual race started in the evening.

«Scientific studies of human biorhythms have been able to identify the time when a person is at  peak activity, which makes this the optimal moment for physical exertion. This period begins at six in the evening and ends after eight. That is why we decided to make the Summer Run an evening run», says project manager Boris Pen.

In addition a new location was chosen for the runners - Almaty Arena sport and entertainment complex. It has already hosted city-, national and and international events.

«1,200 participants gathered at the start of the Summer Race. At the main distance of 12 km 1040 took part, in the children's 3 km - 110 and in the 8km Nordic walking 50”, says the executive director of the corporate fund “Courage to be the First” Saltanat Kazybaeva. «There are more and more participants every year, and each year we need to find a more convenient, spacious venue. Unfortunately, city parks are not always ready to comfortably accommodate such a number of runners and their fans. Almaty Arena is a great place to run. It has a smooth track and easy route.»

The Almaty Marathon team is planning to hold the Summer Swim (June 30th) and the cycling race 'Tour of World Class Almaty 2019' for cycling enthusiasts (August 18th). And on October 13th, the Almaty Half Marathon will be held for the second time. Registration for the half marathon is already open.

The competition is organized by the Courage to Be the First Corporate Foundation, the World Class Almaty fitness club and the Shakhmardan Yessenov Science and Education Foundation.

The “World Class Almaty Tour” amateur cycling race is on this August.

On July 1st 2019, registration opens for the sixth annual “World Class Almaty Tour” cycling race. The race starts on August 18th. All cycling enthusiasts (non-professional athletes) on a road or MTB (mountain) bikes can take part on one of three routes.