Doctors give advice for marathon

There are only 10 days left until the Almaty Marathon. On April 21, 17 000 athletes from 53 countries of the world will line up at the start! 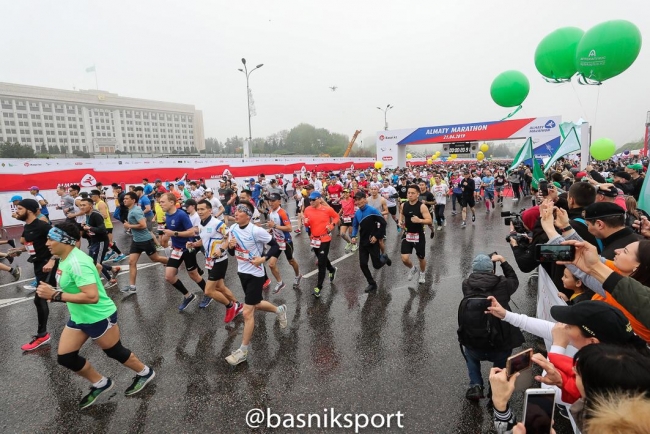 The largest running event in Central Asia the Almaty Marathon was held in Almaty. 17 000 people from 53 countries of the world took part in the race.

This year, the Almaty Marathon broke record for the number of participants from Russia, Kyrgyzstan, Uzbekistan, China, Canada, Sweden, Kenya – this is only a small part of the countries from which athletes came to the Southern capital to take part in the marathon.

Traditionally, the participants of the Children’s distance were the first to run: at 7:30 around 1,000 young athletes aged 10-14 years old competed for the title of the fastest runner. The winners among boys were Dominik Bolovintsev and Rima Grankina among girls.

At  8:10 Akim of Almaty city Bauyrzhan Baybek and the founder of the Almaty Marathon and Chairman of the Board of Trustees Galymzhan Yessenov fired a starting gun for the start of distances of the marathon (42 km) and the half marathon (21 км), as well as for the Ekiden team relаy. There were 113 such teams this year, and this is also a record!

The absolute champion of the main distance (42 km) was Zikrillo Mamatkulov from Tashkent with the result of 2 hours 28 minutes 34 seconds.  Among girls the best result was shown by Aleksandra Kalanova from Moscow (2:42:44). The total prize fund, which this year amounted to 2 940 000 KZT, was divided amongst the top three runners among men and women at distances of 42 and 21 km.

- This year we held the eighth Almaty Marathon. From year to year, the number of runners is growing, people from around the world come to Almaty specially for the marathon, and it was attended by 3000 people more than the last year. The event is becoming a real sports holiday. On the tracks, the runners were supported by fans, we prepared music stations that encouraged the participants – drummers, trumpeters, orchestra, and even football fans. Video clips and photos of fans with the words of support were played on led-screens along the tracks. Every year, the scale of the event increases, - says Saltanat Kazybayeva, director of the Almaty Marathon.

The Almaty Marathon from the first year of its opening has set charitable goals. This year, part of the funds from the starting fees of participants will be directed to the construction of sports facilities in three special children’s institutions.

People with disabilities also participate annually in the marathon. In 2019, at the initiative of the ALMALY Asset Management Company, a special team of runners was formed, the members of which are in wheelchairs. The team included a representative of the National Paralympic Committee (Karagandy), three patients of the Meirim Rehabilitation Center (Almaty), members of the community of people with disabilities “Ardi”, who have participated in the marathon before.

Traditionally, the Almaty Marathon is held with the support of the general sponsor Kaspi.kz, honorary sponsor Sulpak, the Akimat of Almaty, the “Almaty sports” social program and other partners.

The organizers are “Courage to be the first” Corporate Fund, «World Class Almaty» fitness club and Academician Shakhmardan Yessenov Science and Education Fund.

11 unusual facts about the "Almaty Marathon"

On April 21, the annual Almaty Marathon was held. In 2019, a lot of records were set at the biggest sporting event in Central Asia. We have collected the most interesting facts of this year's race, the eigth so far.